ONE BILLION RISING is an international campaign, stemming from the realisation that one in three women on the planet will be beaten or raped during their lifetime. Over a world population of seven billion, this adds up to more than ONE BILLION WOMEN AND GIRLS. Every year on Valentine’s day people all over the world come together to express their outrage, strike, dance, and RISE demanding an end to violence against women. 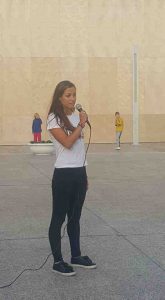